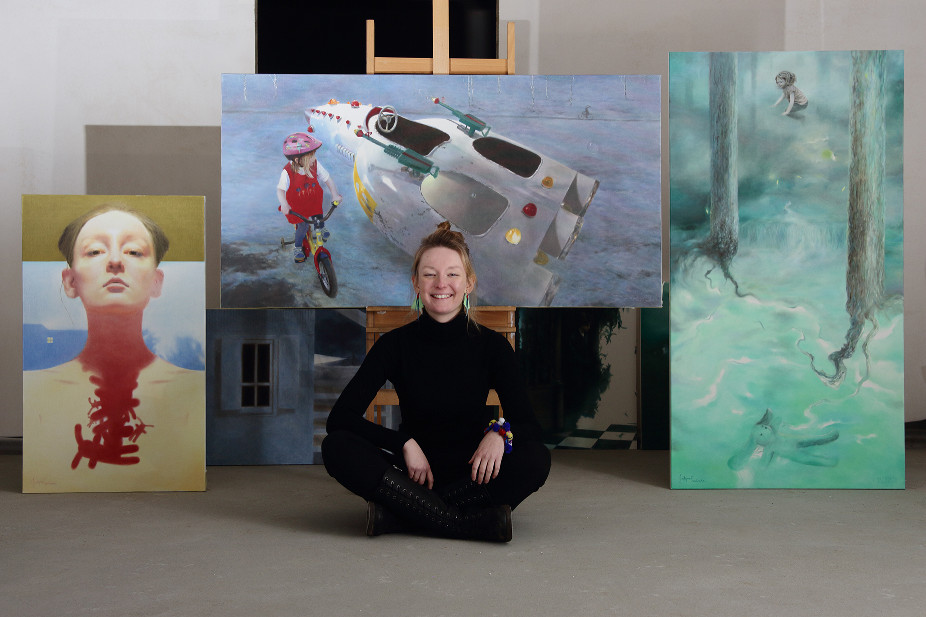 Justyna Grodecka - b. 1998 in Warsaw, Poland. A multidisciplinary artist who works with many various mediums and techniques. A 2-time holder of The Scholarship granted by the Minister of Culture and National Heritage for outstanding achievements, Poland. A holder of The Scholarship granted by the Marshal of the Masovian Voivodeship. A 4-time holder of The Rector's Scholarship for the best students of The Academy of Fine Arts in Warsaw. A holder of The Erasmus+ Scholarship. She studied at the Faculty of Graphic Arts of the Academy of Fine Arts in Warsaw, Poland (A Master of Fine Arts with the highest grade) and at the Freie Kunst Faculty of the Akademie der Bildenden Künste München, Germany. Master's thesis titled "Copyright (C) Justyna Grodecka" received the highest grade despite being perceived as a controversial artistic manifesto by Justyna Grodecka; the work aroused extreme emotions. A winner of many awards, incl. a prestigious KTR 2021 Award for her series of oil paintings titled "Obraz pokolenia Z" which formed an internationally noticed social campaign "Obraz Pokolenia Z" by Zalando; Generali award; Danfoss award; BWA Ostrowiec award; BWA Rzeszów award. She presented her works on large-format murals, posters, banners, screens, pavements in public space all over Poland, including the Warsaw metro, and at numerous solo and group art exhibitions around the world. She organized exhibitions and artistic events popularizing culture. She took part in performative and artistic actions involved in social issues, i.e. the pursuit of peace, the problems of social minorities, the authors' copyright. She created animations/videos that were presented on the Internet and on television, including on the TVP Kultura channel. The film "Obraz Pokolenia Z", in which Justyna Grodecka appeared alongside her works created in 2016-2021, was broadcast on television, the Internet and in the city space throughout the country, including the vicinity of the Palace of Culture and Science in Warsaw. She has performed many times, showed her works and talked about art on the radio, podcasts, press and television, including: TVN24, TVN, TVP Kultura, TVP Warszawa, Polsat, Lokalna TV, Newonce Radio, Radio RMF, Radio Zet, Radio Eska, Radio Kampus, Wysokie Obcasy, Wyborcza, Noizz, Zwierciadło, Contemporary Lynx Magazine, Szum Magazyn, Label Magazine, Onet Kultura, Elle, Wirtualna Polska, Aktivist, CzasNaWnętrze magazyn, Wirtualne media, FashionPost magazyn, WhiteMad, Aspiracje, ReasonWhy, Legalna Kultura and many other domestic and foreign media.

In 2021, her series of paintings titled "Obraz pokolenia Z" ("The Depiction of Generation Z") formed an internationally noticed social campaign "Obraz pokolenia Z" by Zalando - her paintings along with her art statements were all over press, TV, Radio, Internet and cityscape. The campaign was awarded in the prestigious "KTR" competition in the Craft/Illustration category for the paintings by Justyna Grodecka. More info at:
www.asp.waw.pl/2021/05/27/obraz-pokolenia-z-justyna-grodecka-w-kampanii-zalando
www.asp.waw.pl/2021/11/30/nagrody-ktr-dla-kampanii-obraz-pokolenia-z-za-obrazy-justyny-grodeckiej
www.zalando.pl/campaigns/obraz-pokolenia-z
The interview for Newonce Radio, in which Justyna Grodecka talks about the process of creating paintings, available at the link:
www.newonce.net/epizod/33-tygodnik-jak-namalowac-pokolenie-z-i-kulturysci-pandemii 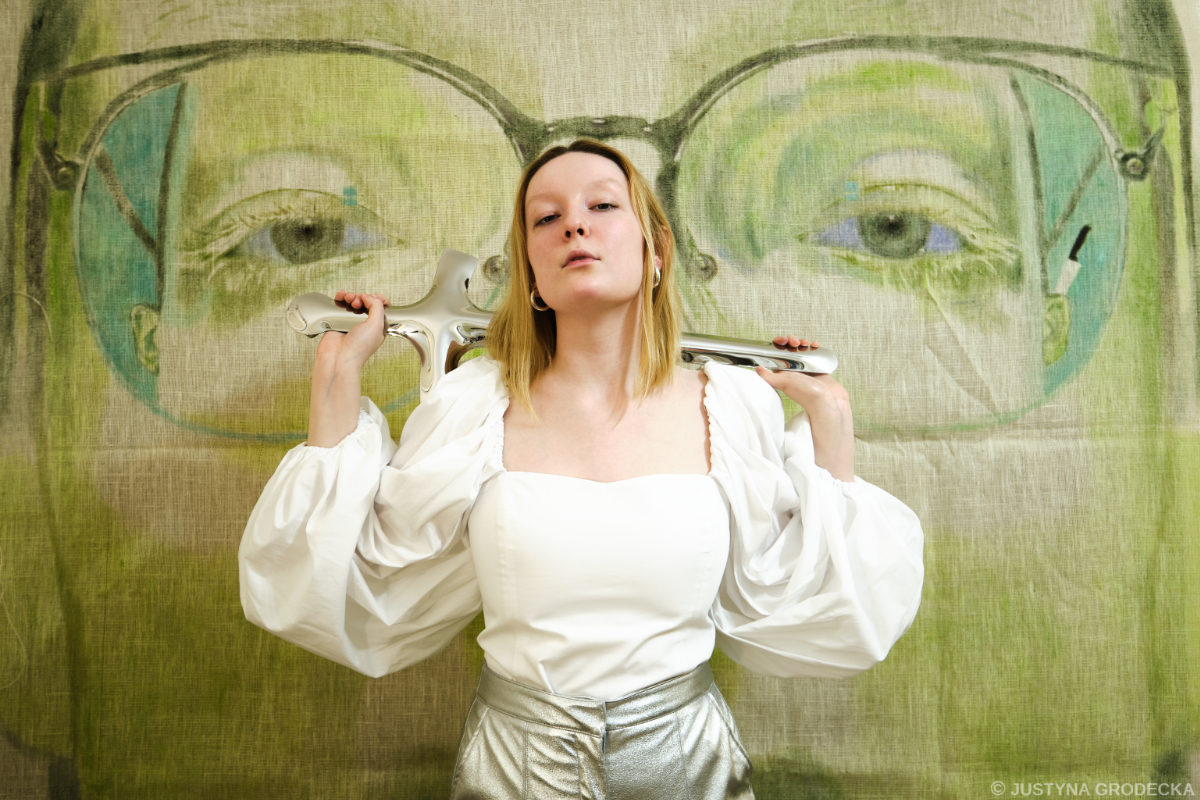 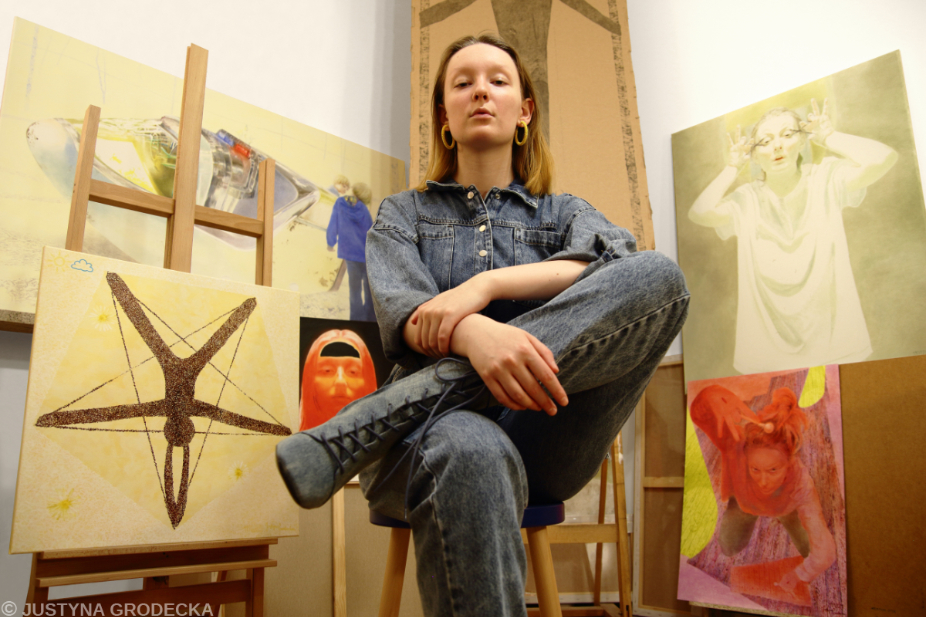 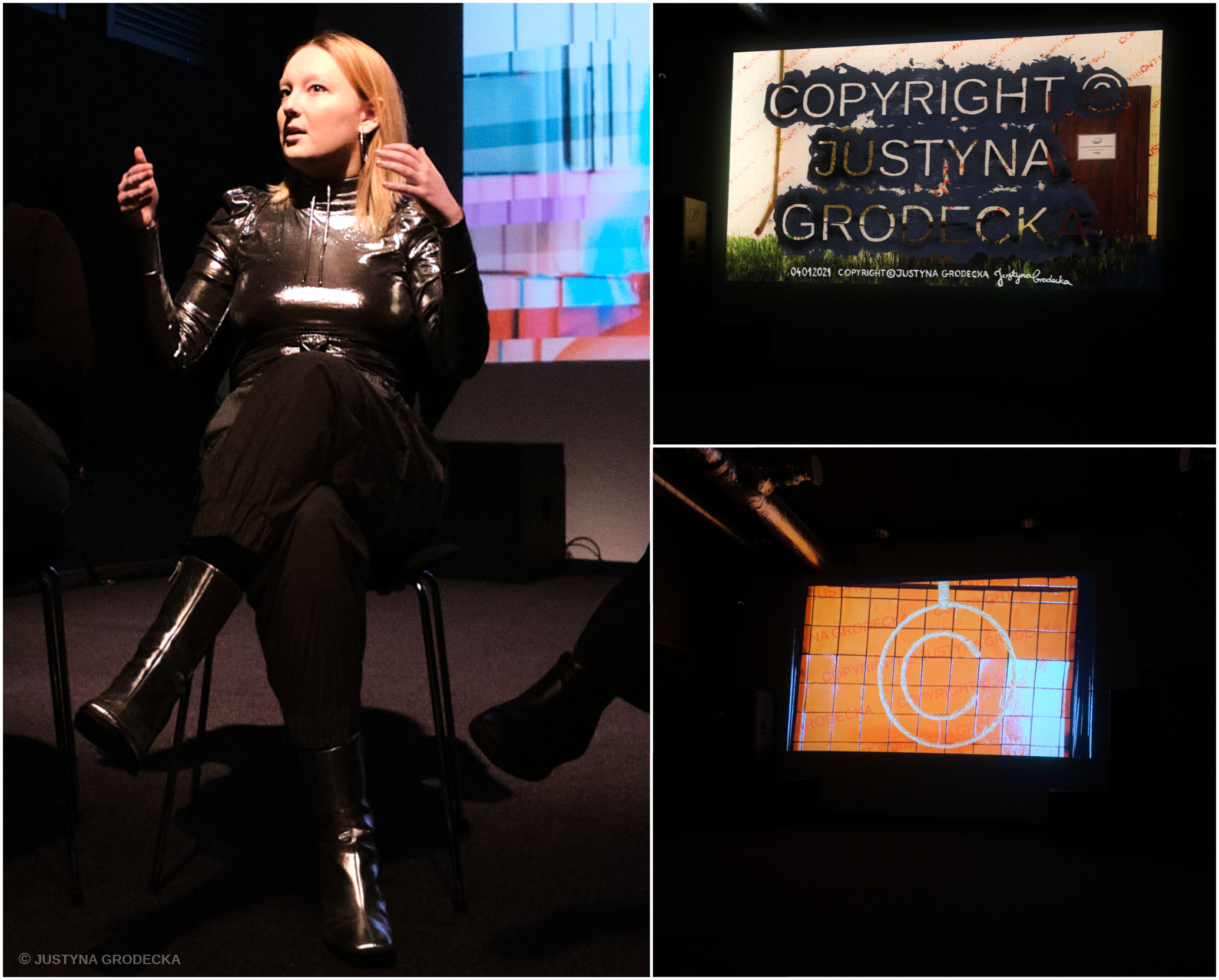 Justyna Grodecka talking about originality and her film "Copyright (C) Justyna Grodecka" (2021) at the IN OUT Festival 2022 in Centre for Contemporary Art Laznia. 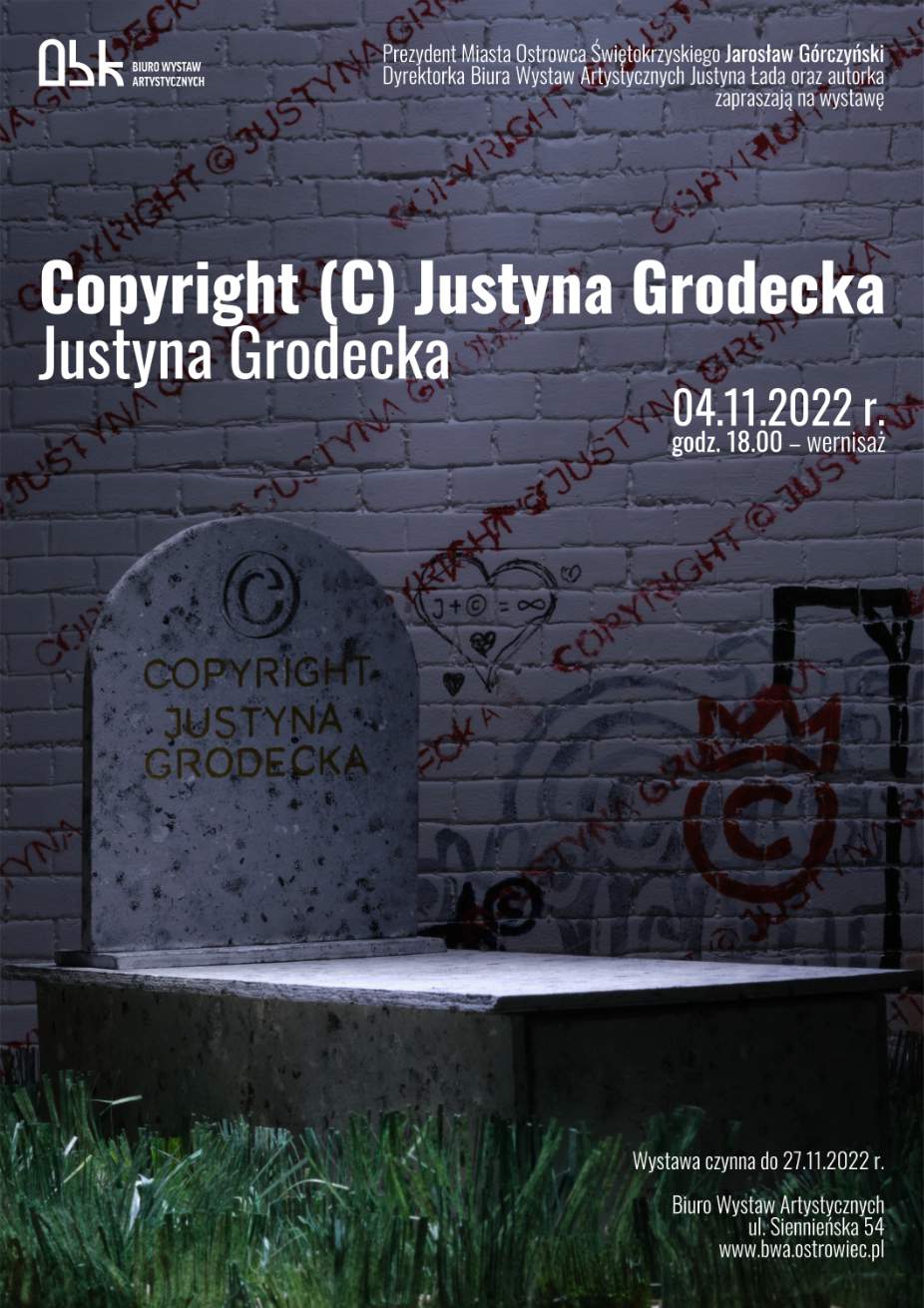 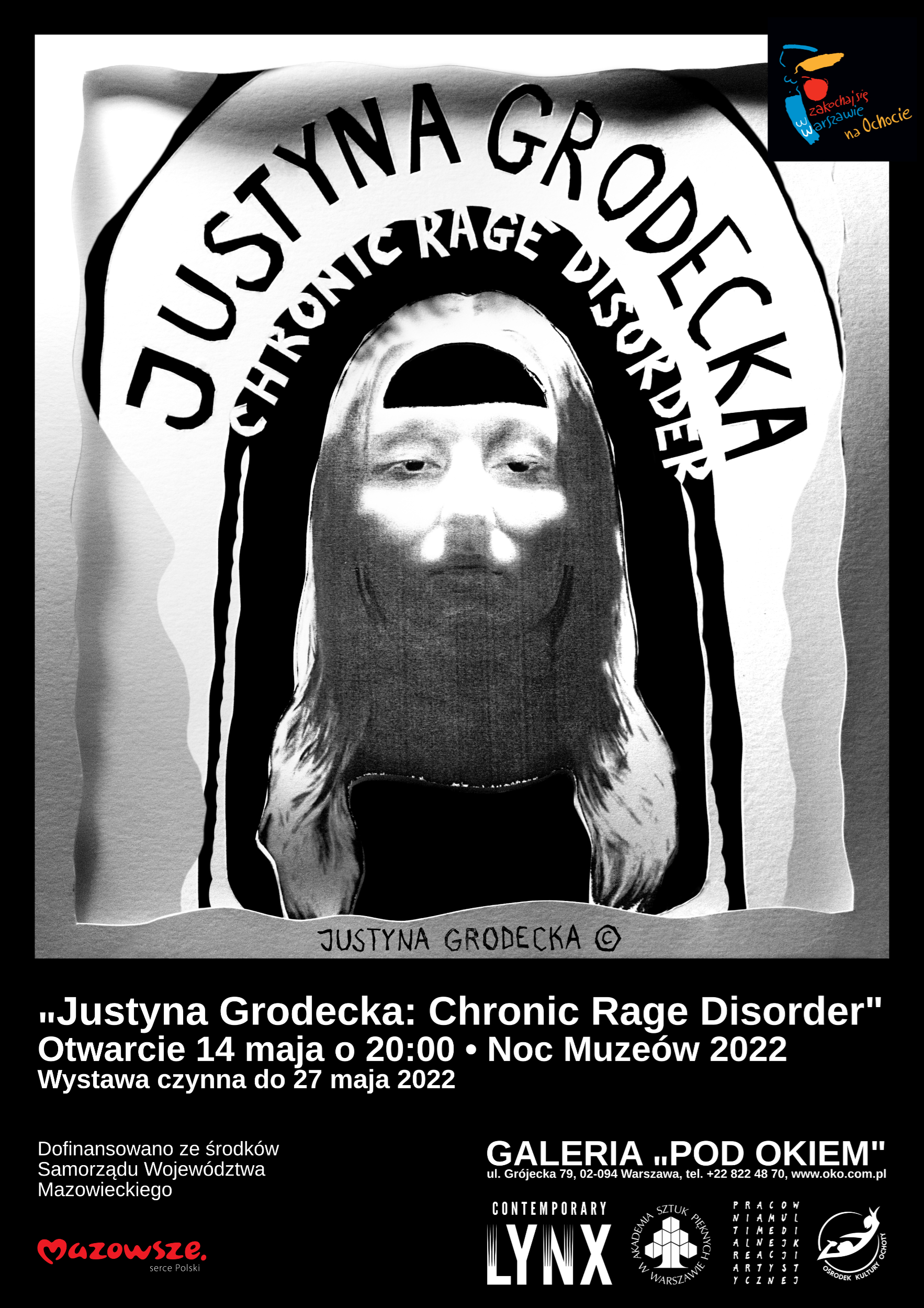 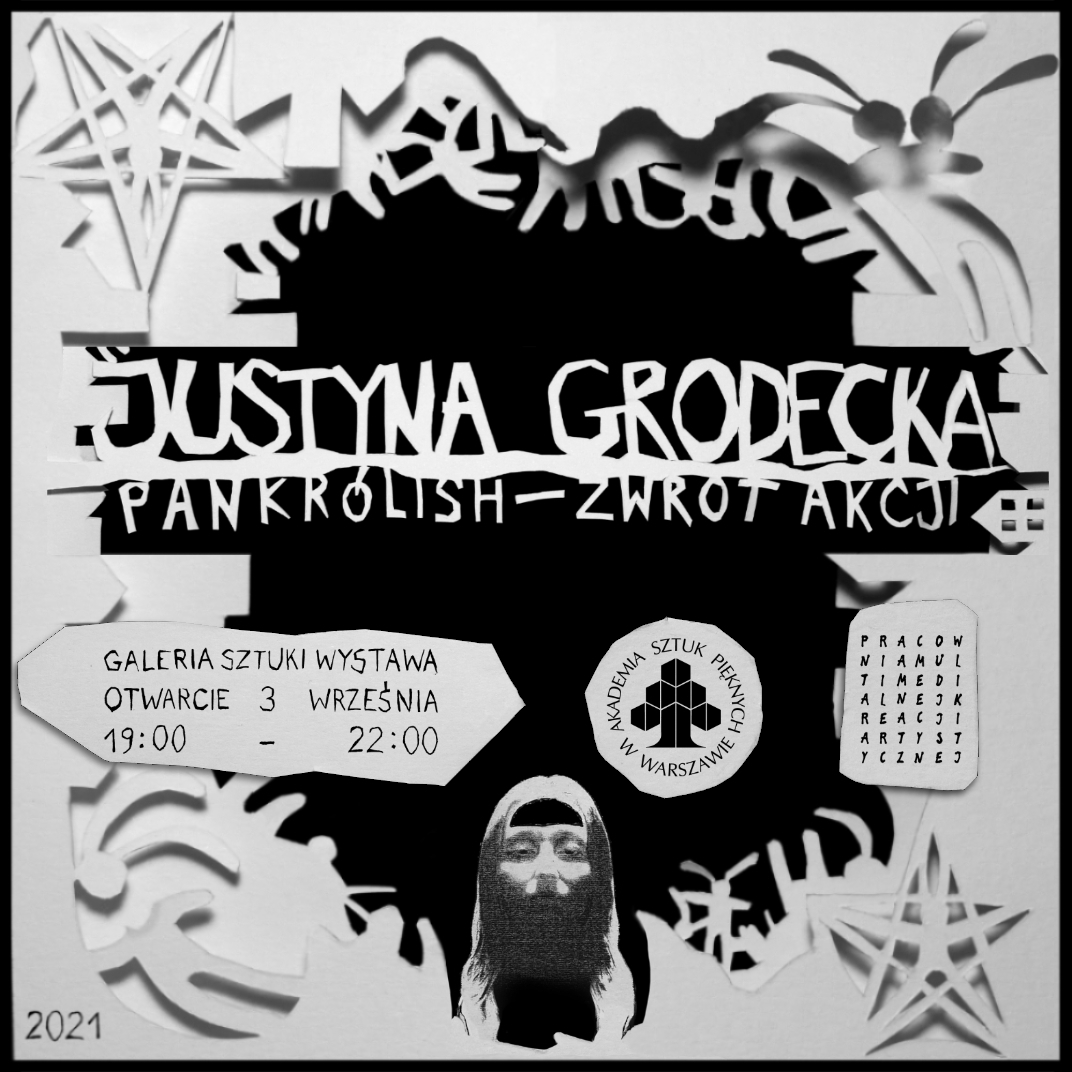 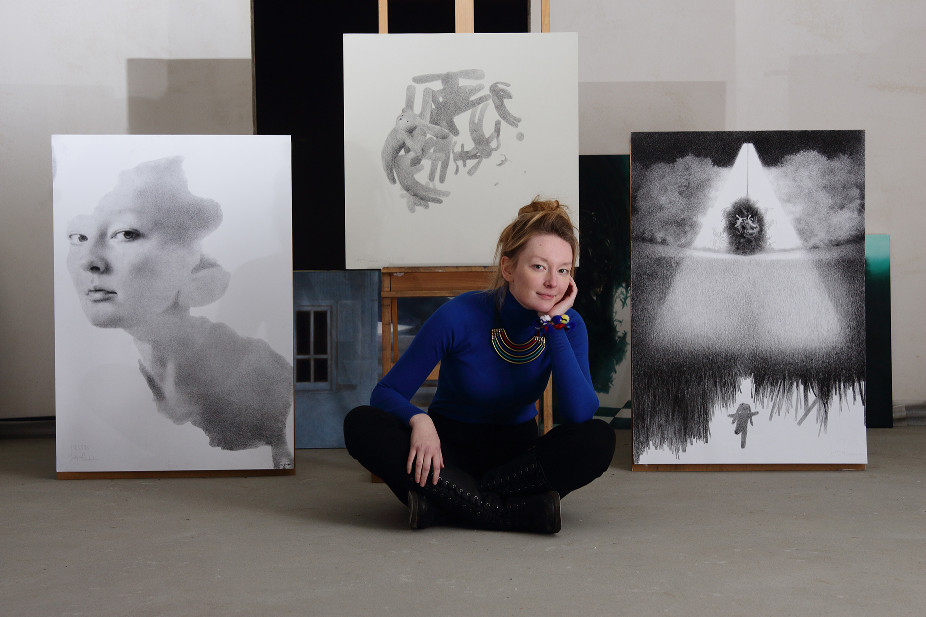